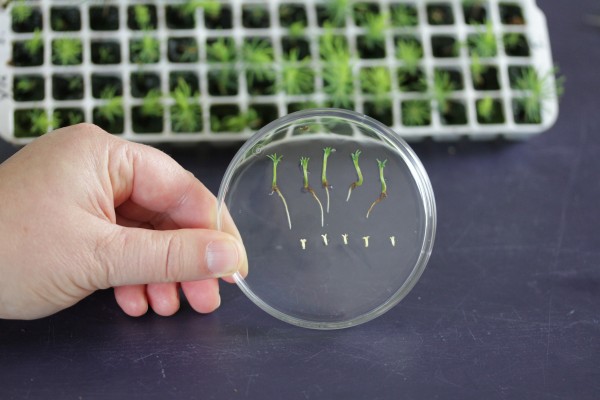 Wood is one of the most important raw materials for bioeconomy. It is estimated that the world consumption of industrial wood will increase in the future. Ornamental and Christmas trees are also a growing business. If we could grow trees with desired growth, qualities or ornamental traits we could meet the demand and enhance the production of raw wood material. The tissue culture technique makes this possible.

The Nordic climate sets a unique need for different plant and tree species capable of flourishing in Finland’s nature. Most of the foreign tree species can´t cope in these tough climate conditions. There are also severe and unexpected risks such as new diseases and pests in the international plant trade for our native species, giving a good reason to use domestic materials both in forestry and landscaping.

Tissue culture enables the production of plants with known characteristics and uniform quality for different uses of forest biomass. Desired traits could be for example enhanced growth, disease resistance, wood quality or ornamental shape. Red needles, narrow crown or globular shape, for example, might be desired traits for Norway spruce in ornamental and landscaping use.

Plant tissue culture is based on totipotency i.e. the ability of a single plant cell to grow, divide and differentiate into an entire plant. Somatic embryogenesis (SE) is one method of tissue culture. It imitates the embryo development inside a seed. This method makes it possible to produce large numbers of genetically uniform embryos i.e. copies of the starting material.

Currently, immature or mature seed embryos are used as starting material i.e. explants for somatic embryogenesis. When the explant is placed into a nutrient medium containing plant growth regulators, it starts to produce embryogenic tissue i.e. proliferate. Embryogenic tissue can be subcultured onto a new medium, which results in unlimited multiplication of the original plant material. However, the embryo production capacity of the ageing tissue does decrease with time.

Embryogenic cultures can be stored for longer periods in liquid nitrogen i.e. cryostored. This is a good way to store the tissue in a juvenile state when it is not in culture. The tissue can be defrosted from the cryostorage and proliferated again when needed. By changing the plant growth regulators in the tissue culture medium the early embryos that are present in embryogenic tissue are spurred to develop further into fully mature embryos, which then can be germinated in a different medium into emblings (seedlings germinated from somatic embryos).

By staining the embryoenic tissue (left pic.) it is possible to see early embryos (middle pic.) by microscopic examination. Early embryos will develop into fully mature embryos (right pic.) in the right medium.

The method currently used for spruce tissue culturing is time consuming and expensive: tissue is cultured and embryos are produced in petri dishes, and every tissue piece is transferred and embryo picked up by hand. Developing this method into mass-propagation would improve cost-efficiency and thus reduce the cost of a single plant significantly. Bioreactors for multiplication of embryogenic tissues and maturation of embryos, automated embryo harvesting system and optimizing light conditions for different steps in tissue culture, are possible methods to increase cost-efficiency.

A good embryogenic line can produce around 700 embryos per 1g of tissue. With the current petri dish method, only 200mg of tissue is used per dish for propagating embryos, while with bioreactors the amount of tissue can be many tens of times that. It means that in optimized conditions it is possible to propagate thousands of embryos in one bioreactor.

It would be a huge advantage if it was possible to use mature trees, with known characters, as starting material for tissue culture. The time consuming field experiments that are now needed to test emblings would become unnecessary. Research efforts for using mature tree explants have already started and first emblings have been produced with buds of Norway spruce seedlings as starting material for tissue cultures.

From 2011 the Natural Resources Institute Finland´s (Luke) Punkaharju unit has done research with Norway spruce´s somatic embryogenesis. As a result a laboratory scale SE-process has been developed. The ongoing project Vegetative propagation of spruce – towards future plant production is focused on improving the cost-efficiency of the SE-process by utilizing bioreactors and LED-lights in different steps of the process.

Frida Lappalainen is a researcher at the Natural Resources Institute Finland. She develops bioreactor and LED lighting applications for the Vegetative propagation of spruce – towards future plant production project.

Read next article: Recommendations for the Finnish forest-based bioeconomy R&D »