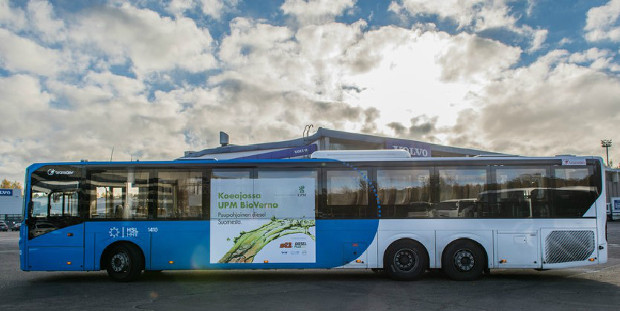 In the EU traffic is rapidly becoming the largest single source of CO2 emissions. In fact, carbon dioxide emissions in traffic should be reduced by 40% by 2030 and 60-80% by 2050. One of the main benefits of liquid advanced biofuels is their capability to significantly reduce not only CO2 emissions but also tailpipe emissions, one of the biggest contributor to air pollution especially in large cities. Advanced biofuels are also an existing solution for current vehicles and distribution systems. The Finnish government has set ambitious national targets on renewable energy in its program. The main focus is in bioeconomy, the promotion of bioenergy and especially of advanced biofuels for transport.

Together towards emission free public transport

In Finland, the Helsinki Region Transport (HSL) aims to cut CO2 emissions by 90% in Helsinki region city traffic by year 2025. Advanced biofuels fit very well in HSL´s strategy as increasing public transportation in sustainable and low emission advanced biofuels can be taken into use immediately. The target for HSL is to fuel all diesel buses only with renewable diesel by year 2020. Similar targets are set by many cities in the EU.

UPM BioVerno fleet tests are done with four identical Volvo Euro VI Class buses that have low emissions and efficient engines, and are operated by Transdev Finland. Two of the buses 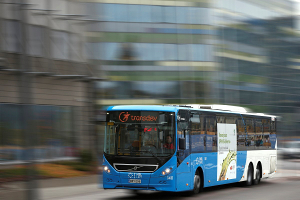 are driven with UPM BioVerno renewable diesel and the other two with fossil diesel. Both VTT and bus manufacturer Volvo will test all the buses used in the field tests before the start, in the middle and at the end of the testing period. St1 is the distributor of the fuel in the project – UPM BioVerno has already been sold by St1 filling stations in Finland as part of their Diesel Plus fuel since the spring 2015.

The heavy duty vehicle field tests will focus on investigating UPM’s renewable diesel in terms of fuel functionality in bus engines, their emissions and fuel consumption compared to fossil diesel. The new round of tests with UPM BioVerno fuel started in October 2015 and run for a minimum of one year. The test will use 20% and 50% UPM BioVerno blends as well as 100% UPM BioVerno diesel fuel.

UPM BioVerno diesel has previously been studied in several engine and vehicle tests conducted by various research centres as well as in fleet tests, all with excellent results. The studies have shown that UPM BioVerno works exactly like the best quality diesel fuels and reduces tail pipe emissions significantly compared to fossil diesel. During its lifecycle, UPM BioVerno reduces carbon dioxide emission by up to 80% compared to fossil fuel. The latest studies show that UPM BioVerno diesel also reduces significantly harmful tailpipe emissions, such as carbon monoxide and nanoparticle emissions, which in practice means better air quality.

The bus field tests are also part of a larger “BioPilot” project coordinated by VTT Technical Research Centre. The goal of this project is to encourage companies to commercialise renewable energy solutions in traffic. According to Research Professor Nils-Olof Nylund from VTT, advanced, sustainable biofuels are a great opportunity for Finland – they could be our fast track to low emission traffic. When considering cutting traffic emissions both from the technological and economical point of view, Finland should invest in domestic biofuel production in the coming years.

Read next article: Recommendations for the Finnish forest-based bioeconomy R&D »