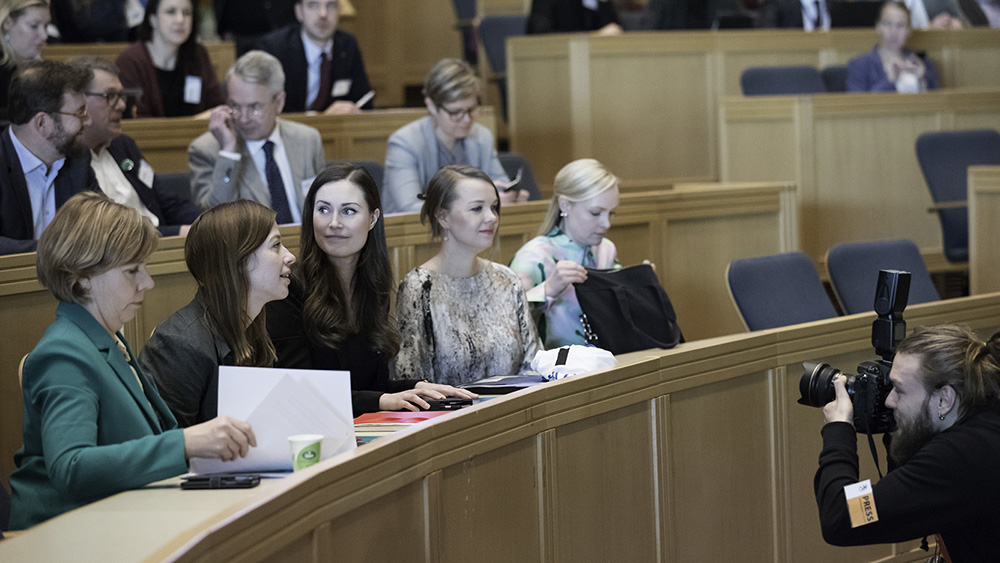 At its climate meeting on Monday 3 February, the Finnish Government published a roadmap that specifies the timetable and objectives for the preparation of climate measures and outlines new actions to achieve carbon neutrality. The meeting under the theme “A fair transition to a carbon neutral economy” brought together the Government ministers and parliamentary groups of the Government parties.

Five Government leaders commented on the Government’s climate objectives and the measures to be taken under Prime Minister Marin’s leadership.

“The Government is committed to taking action that will create a path towards a carbon neutral Finland by 2035. Climate change is the greatest threat to humankind. Instead, the fight against climate change offers opportunities for Finland to create viability, growth, employment and wellbeing. The transition into a carbon neutral society will be carried through in a way that is socially and regionally fair and just,” Prime Minister Sanna Marin says.

“To boost clean investments, the Government has decided to gradually lower the electricity tax paid by the manufacturing industry to the minimum allowed in the EU, starting in 2021. This will support the electrification of industry and create predictability for companies. Predictability is important to ensure that businesses dare to invest in Finland. Climate work can strengthen the competitiveness of the manufacturing industry, open export markers and bring jobs to Finland”, says Minister of Finance Katri Kulmuni.

“The main thing to be ensured in the transition to a carbon neutral society is that everybody stays on board. When reducing emissions, we must make sure that the costs will not accrue to those already facing hardship, and that those now working with fossil fuels will find new jobs. People who are in the poorest position suffer the most from climate change, which means that the most unfair approach would be to do nothing,” Minister of the Interior Maria Ohisalo points out.

“The most reliable way to turn Finland into the world’s first carbon neutral welfare state is to enable everyone to adopt climate-friendly solutions independent of what they earn or where they live. Our pledge to the Finns is to implement climate measures in a way that creates work and wellbeing, not fear and conflicts,” says Minister of Education Li Andersson.

“The task for us politicians is to encourage people to make sustainable choices in terms of climate change. Lowering the electricity tax paid by the manufacturing industry to the minimum allowed in the EU is important to improve the competitiveness of Finnish companies – this has been a top priority for the business sector. We should turn the fight against climate change into a success story,” Minister of Justice Anna-Maja Henriksson says.

The Finnish Climate Change Panel estimates that achieving the climate objective requires emissions to be reduced by 35 million tonnes of carbon dioxide. Through its climate work, the Government aims to reduce emissions by 17–24.6 megatonnes (Mt), on top of the emission reductions of 16 Mt that are already being implemented. The Government will continue the preparation of measures to reduce emissions in the agreed timetable in the programme work that is under way. The Government has decided on estimated emission reduction targets for individual sectors to ensure that the necessary reductions to achieve carbon neutrality will be implemented.

“Emission reduction targets for individual sectors are an important policy decision that will guide the Government’s climate work. On the global scale, a carbon neutral Finland by 2035 is a very ambitious target. It has been important to build a common understanding between the Government parties concerning the magnitude of the challenge and the actions that will be needed. The gap between the climate objective and the actions decided so far is considerable. A lot of work needs to be done and decisions made to reach the target,” says Minister of the Environment and Climate Change Krista Mikkonen.

The aim for the Government is to increase Finland’s net carbon sink. The Government aims for additional sequestration of at least 3 Mt in the land use sector compared to the present measures.

The Government also outlined the future stages of the overhaul of energy taxation decided in the Government Programme. The purpose of the measures is to boost the transition into clean energy. To promote clean investments, the Government has decided to lower the electricity tax of the manufacturing industry to the minimum allowed in the EU, gradually phase out the industrial energy tax rebate system, and make changes to the taxation of heating fuels.

Entrepreneurship, competitiveness and making use of the potential of the whole Finland are the key conditions for a fair transition. The carbon neutrality plans for individual sectors aim to reduce emissions by 6–7 Mt. Minister of Economic Affairs Mika Lintilä points out that Finnish companies have the expertise in clean technologies and a lot to offer to the rest of the world.

“Fight against climate change means great opportunities for us. Finnish climate solutions created by companies offer opportunities to do business on the global scale. Low-carbon roadmaps for different sectors ensure that we have clear targets for emission reductions in Finland, and that we have the tools that enable us to achieve these,” Lintilä says.

The Government will set up a climate fund based on the State Business Development Company (VAKE). The fund will focus on combatting climate change, promoting digitalisation and boosting low carbon operations in manufacturing industries. Transition into a low-carbon economy requires sufficient investments in developing a circular economy, clean technology solutions and energy efficiency. The capital of the State Business Development is more than EUR 2 billion. During this government term, hundreds of millions of euros can be used from the climate fund.

“More detailed rules for the operations and financing of the climate fund will be prepared by the 2020 government discussion on spending limits. The focus will be on combatting climate change and on digitalisation, but in a way that overlaps with other players are avoided and the instruments used are proportionate and effective,” says Minister for European Affairs and Ownership Steering Tytti Tuppurainen.